New storms are moving in on Hawaii after devastating flooding ravaged the island of Kauai. Record-breaking rains fell on Kauai last weekend and the governor declared a state of emergency. Hundreds were stranded and had to be rescued.

With damaged bridges and impassable roads, the U.S. Army and the National Guard have airlifted over 300 people from the area since Monday. Many others were rescued on jet skis, reports CBS News correspondent Michelle Miller. But in the town of Hanalei on the north shore of Kauai, the U.S. Coast Guard said those rescues were impossible.

Erin Gwilliam was on vacation with her husband and three children when the flooding trapped them inside their rental home.

"It was just torrential. I’ve never seen or heard rain like that before," Gwilliam said.

They were rescued by pro surfer Laird Hamilton, who has made a living by riding monster waves. He lives nearby and owns a boat. 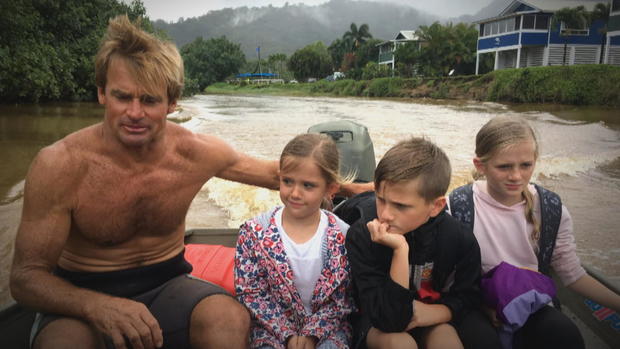 "It’s hard to conceive that that much water could come from the sky. And I mean it was like an ocean back there," Hamilton said.

Some parts of Kauai have gotten about 64 inches of rain this year and half of that fell in 48 hours. The streets are drowned in rain and covered in mud. Downpours have flooded homes and streets, uprooted trees and over-turned cars. Hundreds were stranded with almost no way out. With more rain on the way, Hawaiians are racing for higher ground before another storm swallows the land beneath them.

"We heard there’s another storm coming and we don’t want to take any chances," resident Adriana Carril said.

Military and local officials are scrambling to deliver water, food and blankets.

Police in Kauai are investigating reports of attempted extortion of stranded passengers. They say some people who were trapped and then got onto boats to be rescued were asked for money before being let off. The island could see another two to three inches of rain in the next 48 hours. Because the soil is so waterlogged there, it won’t take much to cause more flooding.