Inside the government agency that deals with mutilated money 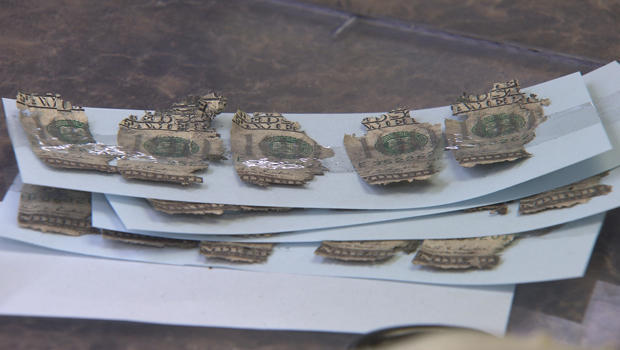 Now the subject is dirty money, and we do mean DIRTY: Ripped, torn, destroyed … but NOT worthless, as CBS’ Rita Braver explains:

It’s the ultimate "the dog ate our rent money" story, starring Tess. And it started when Mark Bunn, of Greensboro, N.C., walked into his bedroom one afternoon: "And I just happened to glance down at my bed, and I saw a piece about maybe the size of my thumb of a $20 bill, and another little piece of a $20 bill…"

"I put two and two together, and came up with Tess!" Mark laughed.

That’s when Mark remembered hearing about a U.S. government agency that might come to the rescue: "A person answered and he was like, ‘If you feel you would have the patience and the time to follow your dog around for the next two to three days, you will find your money.’"

Yes, since the 1860s, the U.S. Bureau of Engraving and Printing has had a program that replaces severely-damaged money.

Eric Walsh, the assistant manager of the Mutilated Currency Division, explained: "A lot of people store money in their house. They either store it in the drywall, they’ll put it in their attic, and mice will get into it, termites will get into it."

Walsh says his division processes about 23,000 cases a year, and replaces between $30-$40 million worth of damaged currency.

"Our most common [cases] are burned currency through fires, [and] water damage through floods or being buried," he said.

In fact, one man who sent in the damaged currency below, one of about 100 packages that arrive each day, wrote that water had leaked into a money-filled jar buried at his deceased parents’ home. 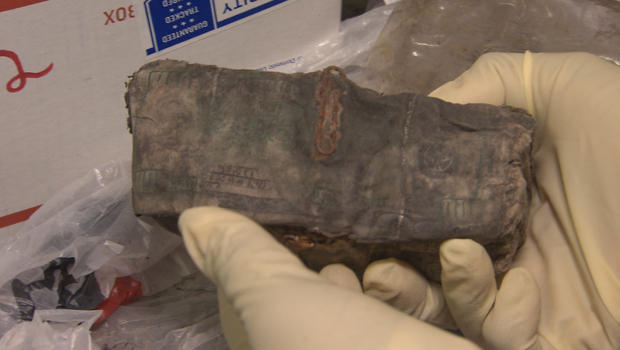 A brick of bills. (CBS NEWS)

Frieda unfurled the ruined bills. "This is one of our worst cases," she said.

"Does he say how much money was there?" asked Braver.

Twelve full-time examiners piece together the bills sent into the office.

Some have been accidentally shredded! 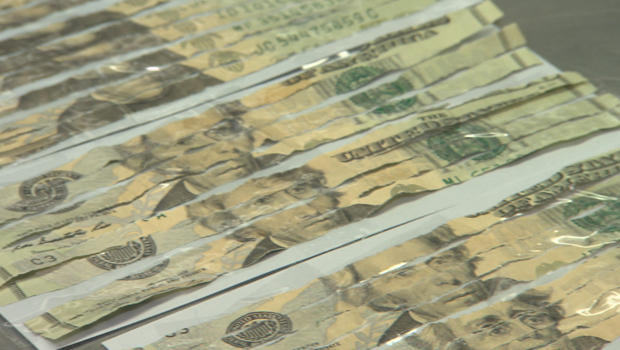 Sharon Williams still remembers recovering $1,000 from a woman who’d stored her purse in the oven: "The husband ends up turning on the oven and then he was like, ‘What is that smell? What is that foul odor?’ And the wife was saying. ‘Ah, my purse was in the oven!’"

Many packages arrive with detailed letters, but often, examiners like Lewan Ellerbee are left to guess how the money got destroyed.

She showed Braver a water-damaged wallet: "They buried it somewhere and the water just got to it, deteriorated, got it real stuck together. So I’m trying to pull it apart." 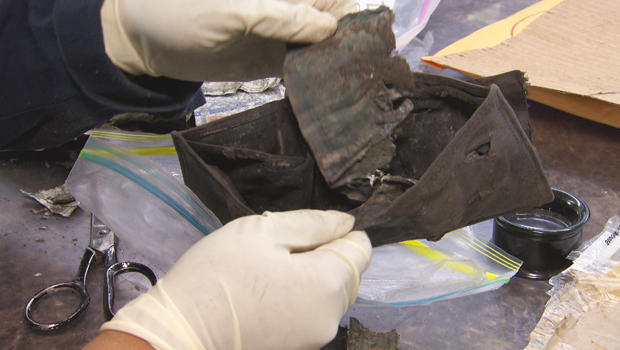 "What makes you do this?" asked Braver.

"I like to help people," Ellerbee replied. "When you talk to a customer and they’re crying, like, ‘This was my life savings. I don’t know what else I can do.’ You feel really bad, so you try to do the best you can."

As for Mark and Scott, they dutifully followed Tess the dog around for a few days, and sent in a bag full of … well, let’s not go there.

"I think it enhanced my view of the government to some degree," said Mark, "that it actually was something by the people, for the people, that actually had a direct effect on my daily life there."

"Did you learn a lesson from this experience?" Braver asked.

"Oh, clearly learned a lesson: I still don’t own a dog to this day!" Scott laughed.