BILLINGS – The one-tenth of an inch of rainfall that fell in Billings on Wednesday morning had nothing to do with the approaching big snow event coming our way.

The only thing that did was knock us down out of the 60s, and it will step down even a little farther in another day or two. That’s when the snow will fall.

Snowfall amounts for Thursday through Friday are expected to vary anywhere from 2 to 5 inches up by Glacier National Park to around 19 inches by Yellowstone and Teton Parks.

Here in Billings, the projected snowfall amounts are still expected to stay around 6 to 10 inches with local amounts up to 16 in the Bull Mountains and in some of the Beartooth Foothills..

The rain from this morning continues to move into the Dakotas allowing sunny skies for Billings the rest of Wednesday.

But the computer models shows more rain showers starting to move into the area by midnight Wednesday.

Another batch of rain moves in to Billings Thursday at 6 a.m. and stays as rain throughout most of the day until 6 p.m.

It now looks like after 6 p.m. the temperatures will begin to cool down and the rain will start to change over to snow Thursday night into Friday morning.

That is when Billings can expect its share of snow accumulation. 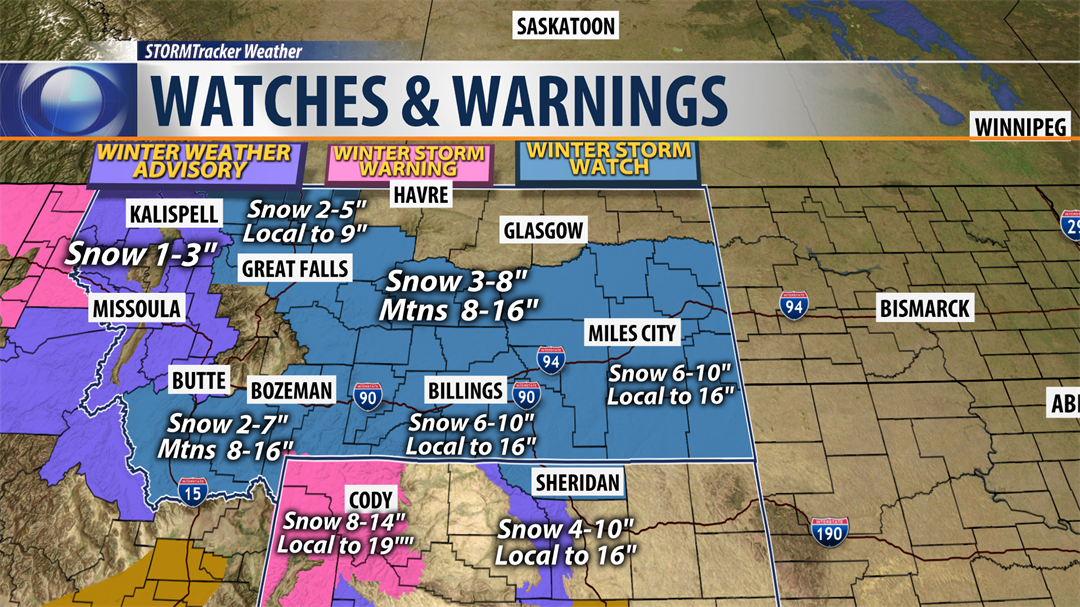 Thursday: Mostly cloudy with a 90 percent chance for rain mixing with snow in the morning and afternoon, turning to all snow again Thursday night. Northeast winds 15 to 25 mph. High 42 degrees.

Friday: Mostly cloudy with snow likely in the morning and a 70 percent chance for additional snow that afternoon. Northwest winds 15 to 25 mph. High 38 degrees.