Inside the reveal of the 2019 Chevy Camaro

First on "CBS This Morning," we have a look at the 2019 Chevy Camaro before its public debut. The automaker spent years designing and testing the famous muscle car, and it’s taken extraordinary measures to keep the reboot of the classic name a secret.

This is the future driving by – hidden in plain sight. 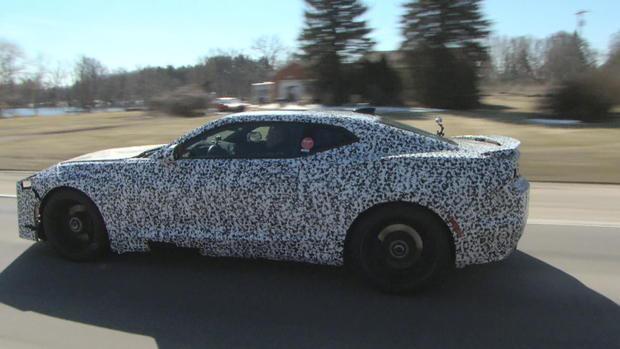 "This is considered a high-security vehicle right now," said Ken Morris, General Motors vice president of global product integrity. "It has to be covered when it’s stopped."

"So how long after you drive the 2019 Camaro off the proving grounds for the first time does a spy photo show up?" Van Cleave asked.

The Camaro erupted onto the auto scene in 1967 to take on Ford’s Mustang. Through the years and multiple design changes, it’s become an icon for General Motors, so secrecy is key. Pictures not only ruin the surprise for customers and tip off competitors, but they also hurt business.

"People are so enthusiastic and passionate about their cars, they want the latest and greatest thing. And so when they recognize we are going to evolve the design… they may hold off buying," Morris said.

So carmakers have developed an array of trickery. From heavy vinyl to disguise the car’s shape and look to brand new flash molded pieces transforming the front and rear of a vehicle to hide the new design underneath.

The body is wrapped in dizzying camo to fool the eye. Even the engine gets covered.

It’s not just what you see outside. When you go inside the car, everything is camouflage too – the dashboard, steering wheel and even the seats.

The work is done at a secret GM facility where prototypes of future models are built. A team of three will spend hours disguising a vehicle before it leaves the plant.

"You could actually put a competitors brand on the front if you wanted to really have some fun with the photographers," said Al Oppenheiser, who leads Chevy’s Camaro team.

He took us for a ride on GM’s proving grounds – usually off limits to cameras – to try out the new 10 speed transmission in the V8 Camaro SS. Every GM vehicle gets tested here.

Brian Williams is an auto spy photographer who sells pictures of new cars to websites and magazines, from the new presidential limo in camo to Chevy’s Malibu or a Jeep pickup dubbed the scrambler.

"What’s the greatest length you’ve gone to get a photo of a car?" Van Cleave asked him.

"Getting a phone call and driving 17 hours through the night," Williams said.

A good reason to use more than just a little smoke and mirrors to protect this secret. 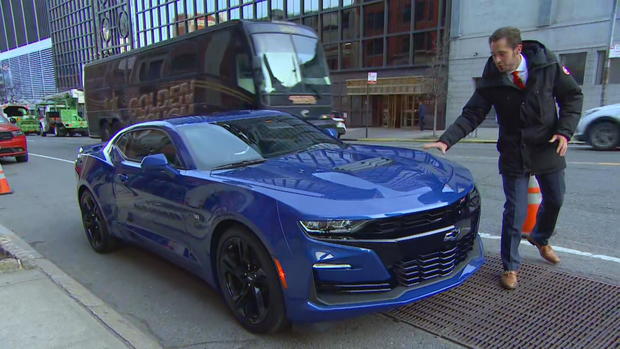