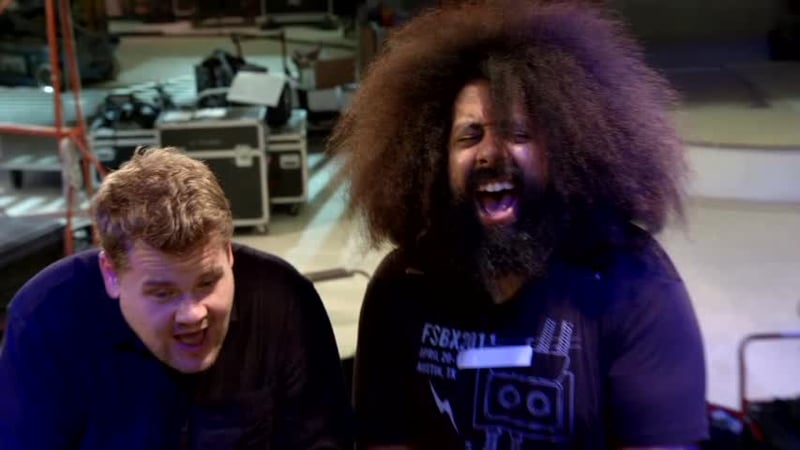 Reggie Watts has a full plate.

During a recent trip to Los Angeles I had a chance to visit the Late Late Show with James Corden. His right hand man? The unpredictable Watts, who grew up in Great Falls.

Just a few minutes before showtime on a Monday, Reggie heard I was in the green room and unexpectedly walked out to introduce himself. He was clad in a plain black t-shirt with MONTANA splashed across the chest in white block lettering. How’s that for a shout-out to Big Sky Country?

After a few minutes of conversation, Watts wandered off and hammered out the Late Late Show featuring, in this episode, two main characters from the newly-release Tomb Raider. Right after, he’s back and spent almost a half hour chatting with me in the green room.

First question: had anybody ever confused him with NBA MVP candidate James Hardin?

“I mean, sometimes I am him,” Watts smiled. “We switch consciousness, so we are kind of the same person. But, no, you’re the first person to tell me. I didn’t think anybody had noticed."

Watts admits he’s not much of a sports fan but says he did suit up at Great Falls High for the Bison football team.

"I mainly just wanted to play football because I wanted to do that classic, ‘I’m on the football team,’ or whatever,” he recalled.

He admittedly wasn’t serious about football.

He says his freshman campaign was part of a plan to spend his high school years just sampling everything. Sports, band, etc.

“Then, second year I was in student government and lost a bunch of weight, and was modeling a little bit for the school paper and all this stuff. I was in the yearbook, drama team. We went against your school, Billings West, and won three categories out of the five. That was pretty amazing, it was a cool year. I didn’t really have any social class. I was hanging out with my friend John Thomas, my friend Steve. I was just kind of in everything, but I ended up being kind of a weirdo, goth, new-waver kid."

All the sampling led Watts into music, comedy and now late night television on CBS. Though he says this was never really on his radar.

“I knew I wanted to make people laugh and make cool things people could experience,” he said. “I just, I didn’t see it going here. There was never a plan to be on television."

His M.O. now is throwing people for a loop, whether in daily conversation, standup comedy or free styling songs with random, silly lyrics.

Then there’s his terrifically untamed hair. A giant afro he styles in a variety of ways.

“I remember just making no effort whatsoever to do anything to my hair when I moved to Seattle in 1990,” he said amusingly. “So I was just like ‘screw it.’ I just started growing out my hair and it was funny, because (gesturing with his hands) you could see the relaxed part kind of growing out with the real hair. So my hair looked totally crazy, but I loved it and just kept growing it out."

One of James Corden’s most popular segments on the Late Late Show is Carpool Karaoke, when he drives around L.A. suburbs singing to the steering wheel with musically acclaimed artists.

Watts is an amazing musician, so I jokingly wonder if he’s occasionally sad over not being invited.

"No,” he laughs, “because I’m an improviser. If we were doing one where I was allowed to completely destroy things? Then, yeah, that would be great. Otherwise, that’s his thing and God bless us, everyone."

His new album Casual High Technology, an electronic dance collaboration with longtime friend John Tejada, is due out May 11. The two longtime friends combined their names to come up to orchestrate the band Wajatta.

“They’re just tracks, kind of architectural compositions,” he explains. “So, we created this music and we were like, screw it, let’s release it. We’ll call it Wajatta. It’ll be a mixture of our last names, and we found a label that could move as quickly as we wanted to move, as fast as we wanted to get it out.”

Two weeks before that debut, on Friday, April 27, Comedy Central unveils Watts as the host of its American version of Taskmaster, an extremely popular comedy in the UK and Europe.

“It’s this fun show that has a bunch of recognizable people from various fields, like a DJ, standup comedian, actors and things like that,” Watts explains. “It’s just funny to see people out of their element, people you might now as, ‘Oh, he’s a really cool DJ/producer,’ and now he’s doing these silly tasks, and you’re like, ‘Oh, that’s what he’s like.’"