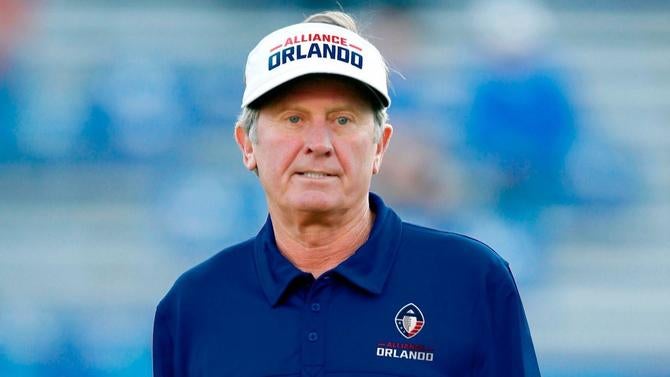 Steve Spurrier is returning to football. (Alliance of American Football)

The Alliance of American Football, a new professional spring league set to debut next February, revealed that the first host city will be Orlando, with college football Hall of Famer Steve Spurrier set to coach.

The Alliance’s co-founder Charlie Ebersol, former NFL wide receiver Hines Ward, who is serving as an executive of player relations, and Spurrier himself joined "CBS This Morning: Saturday" to discuss the new league, which will kick off just one week after next year’s Super Bowl.

The games will be available to stream on a free app, on CBS and CBS Sports Network. Teams in eight different cities will play a 10-game season.

CBS will air the league’s debut game on Feb. 9, 2019, one week after Super Bowl LIII on CBS. The network will also carry the Alliance of American Football’s championship game on the final weekend of April 2019. One regular-season Alliance game will air exclusively on CBS Sports Network each week as well.

"We brought in the best players and the best coaches to be at the top of the organization. We wanted to give fans not just an opportunity to see great football but to see what would happen if you brought the players and the league together," Ebersol said.

The younger Ebersol, who directed ESPN’s "30 for 30" documentary on the XFL, brought in former NFL general manager Bill Polian to help oversee the league. Former Steelers safety Troy Polamalu will oversee the player side and former USC standout and executive J.K. McKay will oversee the team side. Advisors include Ward and Justin Tuck, and Dick Ebersol.

The league will have eight teams in eight cities. Rosters will have 50 players each and will be built primarily through a regionally-based draft that will be held this fall. To differentiate the Alliance of American Football from its competitors, there will be no TV timeouts and 60 percent fewer commercials.

Other differences will include no kickoffs and instead of onside kicks, the trailing team will receive the ball on their own 35-yard line facing fourth down and 10. There will also be a 30-second play clock and mandatory two-point conversion attempts after touchdowns.

Spurrier, who left both Florida and South Carolina as those programs’ winningest head coach, said he was intrigued by the new rules of the game, which include two-and-half hour games and 30 seconds in between plays, and the opportunity to include great players who don’t make it into the NFL.

"It’s a fine line between who makes a team and who doesn’t in the NFL. We don’t have a minor league of professional football," Spurrier said. "Those players get a chance to continue playing even if they don’t play at the highest level and then maybe someday they play well enough to go to the highest level."

For Ward, it’s all about the well-being of the players. "Player safety, that’s top priority. I mean, that’s something we want to bring to our league.

Spurrier’s team will play its home games at the University of Central Florida’s Spectrum Stadium, which sits roughly 13 miles outside of Orlando. Tickets to see Spurrier’s team in action will go on sale later this month. Starting on April 17, fans will be able to put down season-ticket deposits on the league’s website.