The 9 states where teachers have it worst 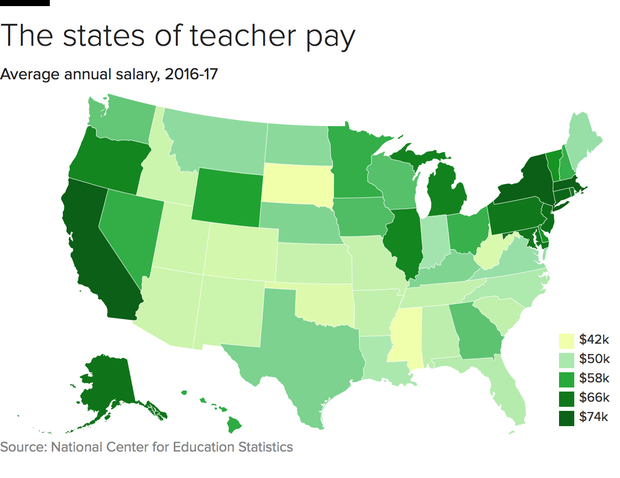 The teacher crisis has been brewing for more than a decade. The recession hurt local tax receipts, which led to a cut in school funding and teacher layoffs. Nationally, teacher pay is 1.6 percent below their average earnings in 1999 and 5 percent lower than their 2009 pay, adjusted for inflation, according to the Department of Education.

"When you work at a second job just to keep your job, the appeal to leave for a field higher paying is much higher," said Lisette Partelow of the Center for American Progress, a left-leaning think tank. "It’s a problem that has been building for a long time."

It’s not only pay and pension funding that’s at stake, but classroom overcrowding. Teachers are effectively earning less than they did in the past two decades while being asked to do more, policy experts say.

Public school enrollment rose 3 percent from 2006 to 2016, while the number of teachers has declined by 1 percent since then. Many districts never rehired staff after they cut positions in the aftermath of the 2008 financial crisis, leading to the current crunch, said Partelow.

Kentucky’s state capitol filled with teachers on Monday who protested pension changes, while Oklahoma educators walked out of their classrooms despite a measure that will give them pay raises of about $6,100.

Some Oklahoma teachers said it isn’t enough, citing a lack of supplies for students and poor school conditions. State funding in Oklahoma for K-12 schools has declined 15.6 percent since 2008 on a per-student basis, according to the left-leaning Center for Budget and Policy Priorities.

It’s just one of 29 states that have cut state funding during that time, according to its analysis.

To be sure, teachers may not earn as much as other professionals, but they receive pensions, a retirement benefit that’s increasingly rare for Americans. A study of California public school teachers by the left-leaning think tank Economic Policy Institute found that the majority "earn a healthy return on contributions and a level of retirement security few participants in account-style plans can count on."

Some lawmakers are taking aim at those pensions, such as in Kentucky, where teachers on Monday protested a bill that would end the state’s existing pension plan for future teachers. The state’s pension system has an unfunded liability of $40 billion, according to the Lexington Herald-Leader.

The pay discrepancy from state to state can be stark. New York teachers earn an average annual salary of more than $79,600, according to the Department of Education. The lowest average teacher salary can be found in South Dakota, where teachers earn about $42,700 per year.

Here are the five states with the lowest teacher pay, according to U.S. Department of Education data from the 2016-17 school year. All are below the national average pay of $58,951.

But teachers may be feeling more of a pinch in states where their pay has declined on an inflation adjusted basis.

There are 29 states where teachers are earning less than they did in the 1999-2000 school year, according to Education Department data. The cost of living has increased almost 50 percent since then.

Below are the five states where teachers saw the biggest decline in pay on an inflation-adjusted basis.

Educators in Arizona have suffered from a 10 percent pay decline since the 1999-2000 school year when adjusted for inflation, or the fifth-steepest decline in the country. The average annual income for Arizona teachers is about $47,400,

Thousands of teachers and supporters marched in Arizona last month to protest their pay. One teacher posted her pay stub on Facebook to show many low-paid teacher struggle to keep their head above water.

"If you are a single person trying to make it on what we make, you couldn’t do it," Milich said.

Michigan teachers earn average annual pay of $62,200, above the national average, yet their earnings have eroded over the last two decades.

Their pay is now 11.5 percent lower than what they earned in the 1999-2000 school year, adjusted for inflation. Education shortfalls stemmed from a decision to cut $1 billion in school spending while also opening the door to more charter schools, according to the Detroit News.

Michigan is one of 12 states that cut general funding by at least 7 percent more per student over the last decade, the CBPP notes. The state has also cut income tax rates, which makes it more challenging to fund schools. 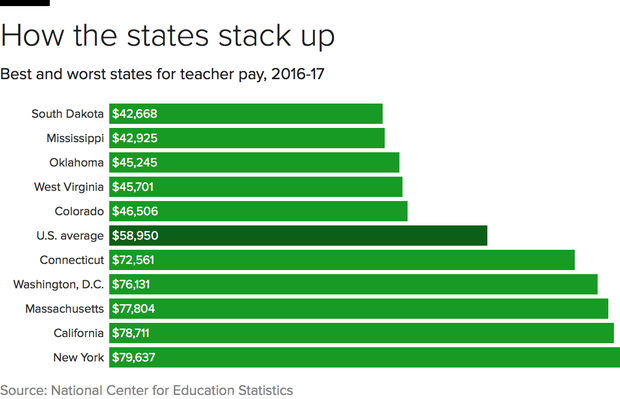 Teachers in North Carolina are planning an advocacy day on May 16 to highlight their concerns, according to statements from the state’s teacher union.

The state’s educators earn just shy of $50,000 per year on average, slightly below the national figure. But their annual pay has declined almost 12 percent since 1999-2000, after adjusting for inflation.

State tax cuts have been problematic for the state, according to the CBPP, which found that North Carolina is among the 7 states that have both reduced general school funding and cut income taxes.

Teachers in this Western state are struggling with both low pay and salaries that have fallen by 15 percent on an inflation-adjusted basis since the 1999-2000 school year. The average annual earnings for a Colorado teacher stand at $46,506, or the 5th lowest in the nation, and 21 percent below the national average.

Denver teachers can’t afford "basic essentials, like health insurance, child care and a mortgage," according to its union, which said its members are prepared to strike.

One Denver teacher said he opted out of paying $425 a month for health insurance for several of the six years he’s taught, citing money pressures.

"I have had to forgo on saving more for retirement, too," teacher Pablo Benitez said in a statement issued by the Denver teachers’ union.

The union, which represents more than 5,600 teachers in Denver, said it’s "buoyed by collective bargaining actions in West Virginia and Oklahoma."

Pay for Indiana teachers has suffered the biggest inflation-adjusted drop since 1999-2000, according to the Department of Education. They now earn almost 16 percent less.

Average annual pay is about $50,500, slightly lower than the national average.

Indiana is having trouble finding enough qualified teachers to fill its classrooms, with some pointing to pay as a culprit.

"People won’t be as interested in going into a field where they will have to take a huge lifetime pay cut," said Partelow of the Center for American Progress’. 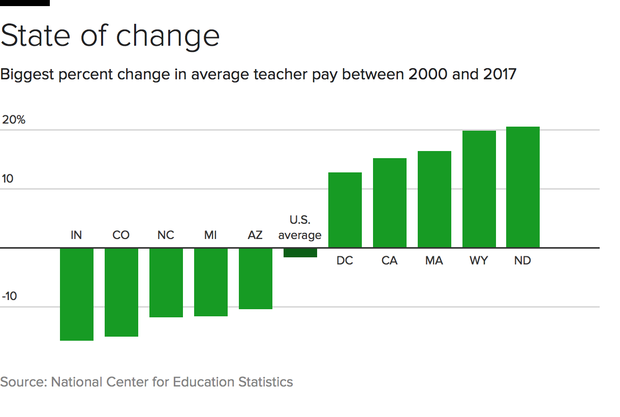