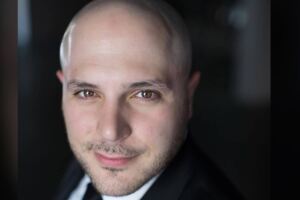 Chris DeRose is a Reporter and Weather Anchor with KTVQ and the Montana Television Network.

Chris started his professional career in Chicago back in 2007. Coming to the Windy City just after college, Chris studied improv and sketch comedy, as well as writing and acting at world famous theaters like The Second City, iO, and Comedy Sportz. He quickly became a staple in the Chicago comedy scene.

It was also during this time, that he was “discovered” while working as a Chicago City Tour Guide on board a double decker bus. A producer from a local television show spotted Chris and offered him a job on TV. The rest is history. That launched Chris’s career as a daily feature reporter on You & Me, a fun morning television show on WCIU-TV.

During his time at You & Me, Chris logged hundreds of hours both in front of and behind the camera, working on multiple stories at any given time. He was best known for his live morning features, ‘Did U Know‘ history pieces, comical man-on-the-street ‘Movie Trivia’s,’ and insightful travel segments.

At the end of 2016, Chris moved to Los Angeles, California where he freelanced as an actor, writer and producer. While in LA he also worked as an Associate Producer on the Gilbert Gottfried Amazing Colossal Podcast and as a Studio Tour Guide/ VIP Guide at Universal Studios Hollywood.

Chris is a graduate of McDaniel College in Westminster, Maryland, and holds a BA in Theater Arts. He was raised in Latrobe, Pennsylvania, a small town just outside of Pittsburgh, which was also home to golf legend Arnold Palmer and television’s Fred Rogers.