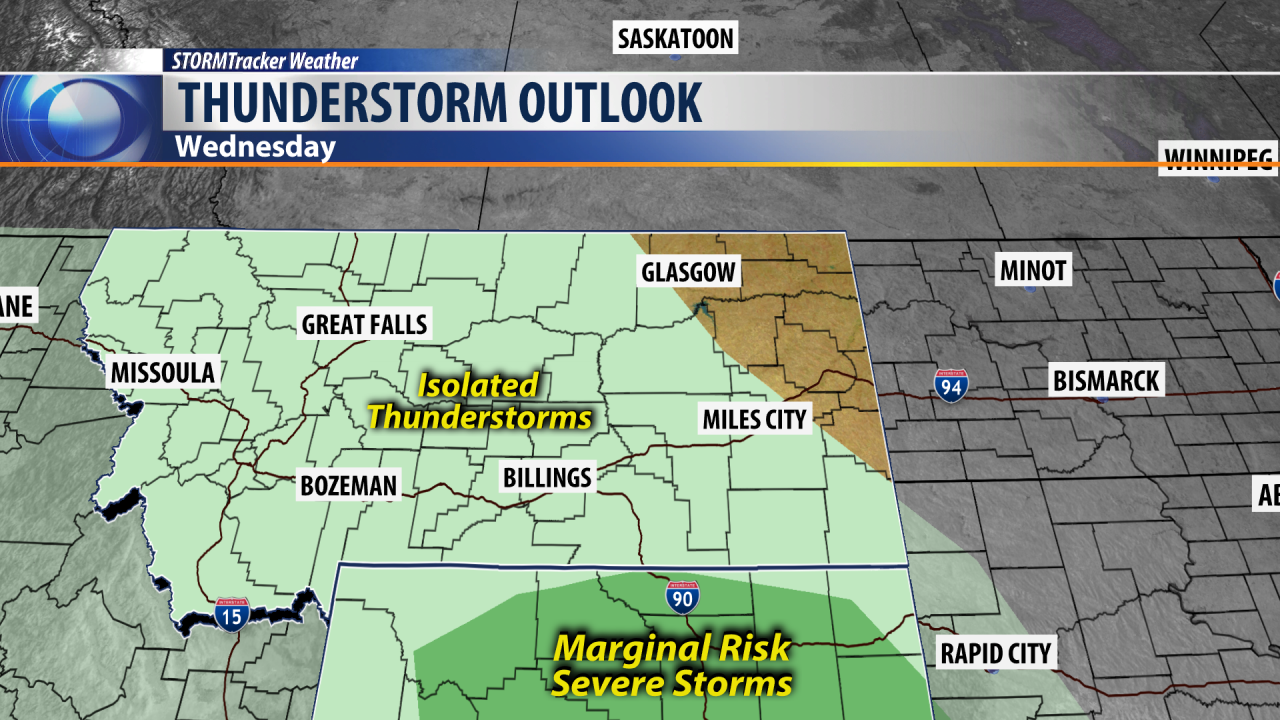 BIILLINGS — Just like the past few days, Billings will be enjoying plenty of sunshine, with temperatures getting into the 80s.

In the early afternoon, Billings reached 82 degrees at the airport, and around the rest the state temps are mostly into the 70s and 80s. Dillon and Glendive were both in the upper 70s at 2 p.m.

Our thunderstorm outlook for Wednesday shows a chance of isolated thundershowers across most of Montana, but the big stuff will be mainly in northern Wyoming.

That’s where we have a marginal risk of severe thunderstorms throughout the day.

The Doppler radar and satellite imagery shows a few scattered thunderstorms already starting to fire up in the Absaroka and Bighorn mountains, as well as some of the Cody foothills.

Those storms seem to be traveling away from Montana as a Low-pressure cell in Idaho continues to draw those thunderstorms to the South and West of Montana.

Our high-resolution forecast shows some showers developing over the Beartooth mountains Wednesday afternoon, but they seem to be doing an end run around Billings, or fall apart before they get to us.

No, it looks like our next chance of rain in Billings will be Thursday about 2 p.m. That’s when a new cold front will sweep across the state and pass through Billings.

By midnight Thursday and Friday morning, some very strong cells could be moving into Yellowstone County and the city of Billings. But then those storms dry up before 6 a.m. Friday.

Over the next 24 hours, our temperatures get close to the 90s, possibly into the upper 80s. They then roll back down to the 60s Thursday morning.

In fact, we expect the temps to stay mostly to the 80s the rest of the week and then drop in to the 70s as we start up next week.

THURSDAY: Increasing clouds with a 20% chance for showers and thunderstorms in the afternoon and a 40% chance for thunderstorms that evening. Southwest winds 5 to 10 mph the morning shifting to the Northwest 5 to 15 mph that afternoon. High 89 degrees.