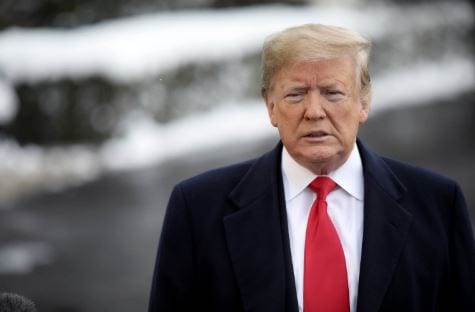 President Donald Trump made a brief, unannounced visit to the Martin Luther King Jr. memorial on the National Mall in recognition of the holiday honoring the civil rights icon.

Trump laid a wreath Monday morning at the foot of the memorial alongside Vice President Mike Pence before quickly returning to his motorcade.

“It’s a great day. A beautiful day. Thank you for being here. Appreciate it,” Trump told reporters as he stood before the large statue of King.

Today, it was my great honor to visit the Martin Luther King Jr. Memorial with @VP Mike Pence, in honor of #MLKDay pic.twitter.com/YsDEA3kygd

The President began Martin Luther King Jr. Day by touting economic growth on Twitter and releasing a presidential proclamation for the holiday.

“Today we celebrate Dr. Martin Luther King, Jr. for standing up for the self-evident truth Americans hold so dear, that no matter what the color of our skin or the place of our birth, we are all created equal by God. #MLKDay,” Trump tweeted Monday morning.

The proclamation cited job growth and new criminal justice reform laws as strides made during his administration.

“We recommit ourselves to the advancement of equality and justice for all Americans, and to the full realization of (Martin Luther King Jr.’s) worthy dream,” it read.

Soon after tweeting the proclamation, the President took to attacking Democrats.

“Democrats campaigned on working within Washington and ‘getting things done!’ How is that working out?#2020TAKEBACKTHEHOUSE,” Trump tweeted.

Last year Trump spent the holiday golfing at his Mar-a-Lago property in Florida. A day ahead of the holiday last year, the President declared that he was “not a racist” following reports alleging he had referred to Haiti and some African nations as “s**thole countries” in a closed-door meeting about immigration.

In 2017, Trump kicked off MLK weekend by zeroing in on one of his frequent critics, civil rights activist and Georgia Democratic Rep. John Lewis. The Saturday ahead of the holiday, Trump tweeted that Lewis “should spend more time on fixing and helping his district, which is in horrible shape and falling apart (not to mention crime infested) rather than falsely complaining about the election results. All talk, talk, talk — no action or results.”

The last three presidents often took part in service projects to mark Martin Luther King Jr. Day. But like last year, Trump is not scheduled to participate in any service projects on the federal holiday he and every other US president have designated as a “day of service” since 1994.

US presidents have typically observed the holiday publicly, making remarks or attending events honoring the day.