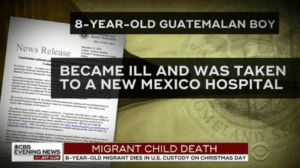 An 8-year-old migrant boy from Guatemala apprehended by immigration authorities near the U.S.-Mexico border died on Christmas morning, according to U.S. Customs and Border Protection.

In a press release Tuesday afternoon, the agency said Felipe showed “signs of potential illness” on Christmas Eve and was transferred, along with his father, to Gerald Champion Regional Medical Center in Alamogordo, N.M. The boy was initially diagnosed with a common cold and fever and was released after being prescribed antibiotics, authorities said.

During the evening on Dec. 24, however, officials said Felipe experienced nausea and vomiting, and was again transferred to the same hospital, where he died early the next day.

The medical center said it could not release any more information due to privacy regulations, but said, “Our thoughts and prayer are with this family during this very difficult time.”

Customs and Border Protection said the child’s official cause of death has not been determined. The agency added that the Department of Homeland Security’s (DHS) Inspector General and the Guatemalan government had been notified, and that they were “engaging” with the boy’s father, as well with family members in Guatemala. The White House did not comment on the death and referred inquires to DHS.

Guatemala’s Foreign Ministry said Felipe and his father entered the U.S. through El Paso on Dec. 18 and were transferred by American immigration authorities to the Border Patrol station in Alamogordo on Dec.r 23. The Guatemalan consulate in Phoenix was briefed and dispatched an official to interview the child’s father, the office said.

The Central American government pledged to help return the boy’s body to his family in Guatemala and to ask the Trump administration to conduct a “clear” investigation of the death.

Lawmakers seized on the incident to criticize the administration’s policy and rhetoric on immigration.

“Thanks to the Trump Administration, this is Christmas at the border. Another tragedy and death of a child while in the custody of the U.S. Customs and Border Protection as the world watches,” Congressman Adriano Espaillat, D-New York, said in statement on Tuesday.

Castro, chairman-elect of the Congressional Hispanic Caucus, called on Congress to probe Felipe’s death when it reconvenes after Christmas. “The Administration’s policy of turning people away from legal ports of entry, otherwise known as metering, is putting families and children in great danger,” the Texas Democrat added.

The boy’s death comes two weeks after another migrant child, Jakelin Caal Maquin, died after being detained by border agents. The 7-year-old Guatemalan girl died on Dec. 8 after reportedly experiencing dehydration and high fever. Her death provoked scathing criticism of immigration authorities by Democrats, who said the death was a result of President Trump’s “cruel and inhumane” immigration agenda.

DHS Secretary Kirstjen Nielsen said Jakelin’s death was “a very sad example of the dangers of this journey.”

“This family chose to cross illegally,” she added.

The DHS inspector general has launched an investigation into the circumstances surrounding the girl’s death.