GOP supporters of Medicaid expansion opposing I-185, hoping for legislative fix instead

HELENA – Most Republican lawmakers whose support enabled passage of Medicaid expansion at the 2015 Legislature are now opposing Initiative 185, which would extend the program past next year.

Members of this bloc of moderate Republicans told MTN News they still support Medicaid expansion, which is providing health coverage to nearly 100,000 low-income adults in Montana, and want it continued.

But they say the program should be reviewed by the Legislature next year and its eligibility tightened up, before it’s extended – and that passage of I-185 would prevent that from happening.

“The problem I have is that 185 doesn’t provide the boundaries that I’d like to see on the next generation of expansion,” says state Rep. Rob Cook, R-Conrad, who co-sponsored the original Medicaid bill in 2015.

Supporters of I-185, led by the state’s hospitals, say they’re more than willing to work with the 2019 Legislature to adjust the program, even if I-185 passes. But they told MTN News they’re not confident that enough Republicans would agree to extend the program at all – and that’s why they chose to ask voters to do it instead, with I-185.

“This next legislative session is going to have to deal with the issue of Medicaid expansion whether I-185 passes or not,” said Jesse Laslovich, who represents several Catholic hospitals in Montana. “What we’re not willing to do is fundamentally gut the program, which is what many in the Legislature want to do.”

Even some of the Republicans opposing I-185 and supporting Medicaid expansion acknowledged that if I-185 fails, there’s no guarantee the program would be extended at all.

“In one scenario, Republicans could say, legitimately, that the people of Montana have spoken and they don’t want Medicaid expansion, in which case it wouldn’t get extended,” Cook said. “In the other case, there is a necessity for a good-will effort, to provide a work requirement, an asset test, cost controls and hospital participation in a plan that perpetuates Medicaid expansion.”

Under current law, Montana’s Medicaid expansion is scheduled to expire next June 30. 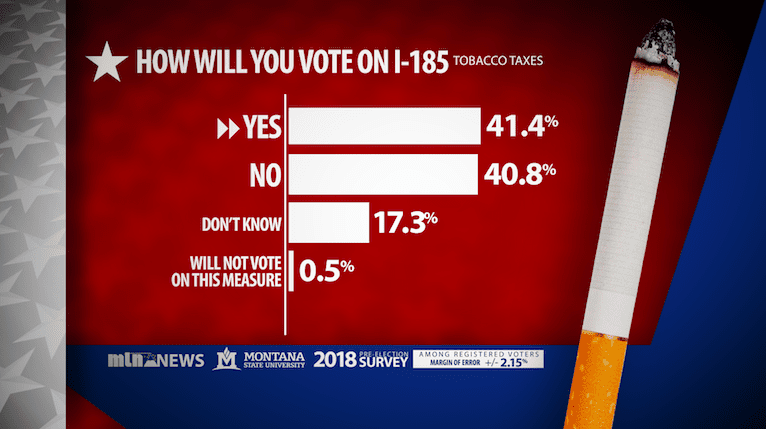 I-185, if approved by voters Nov. 6, would remove that expiration date. But it also increases tobacco taxes by $70 million a year and would use some of that money to help fund the state share of the $600 million-a-year program.

The state must fund 10 percent of the program; the federal government picks up the rest.

Two tobacco firms are bankrolling the campaign against I-185, to the tune of $17.5 million through last week. An MTN-Montana State University poll released this week indicated that the Montana voters are evenly split on I-185, but that nearly 20 percent are undecided.

The poll was taken three-to-four weeks ago – and millions of dollars have been spent since that time, on advertising to influence the race. The pro-I-185 campaign has raised and spent $7.7 million on its efforts.

Republicans controlled majorities in the 2015 Legislature, but a group of moderates defied leadership and teamed up with minority Democrats to pass Medicaid expansion, by narrow margins.

Republicans are expected to have majority control at the 2019 Legislature, but some of the moderates who voted for Medicaid expansion won’t be there – and it’s not clear whether or how strongly GOP leadership may oppose its extension.

Laslovich, a former state senator, told MTN News this week that Medicaid expansion-supporters tried to work out a deal with GOP leadership earlier this year, on how the program could be extended.

But Republican legislators supporting the program ultimately concluded they couldn’t be sure of delivering the votes next year, so Medicaid supporters pursued the initiative, he said.

“That’s what we’re worried about,” Laslovich said. “As we go into the legislative session, we have the extremes in both parties, and we need folks in the middle to get this done. And that middle is getting smaller and smaller and smaller.”

Republican former state Sen. Bruce Tutvedt of Kalispell voted for Medicaid expansion in 2015, but has appeared on campaign literature opposing I-185.

He told MTN News he wants to extend the program, but not without getting concessions from the hospitals on helping finance it and making their prices more transparent. If I-185 passes, he doubts that cooperation would happen.

“I would come down and testify voting for (expansion) again, but with the caveat that there is skin in the game (from the hospitals), there are work requirements – the things that make it a good, functioning program,” Tutvedt said.

Laslovich said there’s no reason why those conversations can’t occur if I-185 passes.

“My colleagues who voted for Medicaid expansion who are now saying we can’t do anything (if it passes) are not telling the truth,” he said. “Any initiative that passes can be tweaked by the Legislature. … We have made the commitment, the hospitals and some of the groups that have supported I-185, to work with the Legislature on some of these tweaks.”